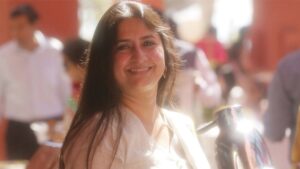 Sarita Bazaz is a pioneer in the catering industry, bringing alive flavours and innovations to weddings and events for the past 30 years.She pays attention to the smallest of details, including sourcing the right produce as well as reinventing and recreating recipes to suit different palates.At events, you will often find her closely studying the expressions and feedback amongst guests tasting food.

Sarita Bazaz, the first woman entrepreneur in the catering industry in India, founded The Food Affairs, an organization that has been spreading love through food since 1993. The Food Affairs is a high-end catering company that offers a plethora of delicious cuisines to fill the space with enticing aromas. They devote themselves to providing unmatched hospitality and soothing food with everlasting flavor. The title of the first did not come easy to Sarita Bazaz. However, she acclaimed it despite varied opinions, uncertain expressions, and squandered opportunities owing to a woman single-handedly managing everything. She holds her expertise in crafting food with magnificence and authenticity and is highly renowned for her attention to the smallest detail, from selecting local ingredients to innovating and recreating recipes.

Sarita was never attracted to the idea of starting her own business; instead, she was primarily drawn towards the skill of cooking, for which she sought the right inspiration from her mother and sister. Seeing them cook, she soon realized that cooking was more about the art of creating taste with passion, which encouraged her to be able to prepare complete meals by the age of 13. She grew up in Bhagalpur, a small town in Bihar, in a typical Marwari household where food is as salient as religion. Most of the activities in the house were centered around food, and every chat was about the menu for the next supper. To summarise, the Marwari culture not only incited the value of food in her but also the hospitality with which it was offered encouraged her to spread love by serving delectable delicacies. Manohar and Aagraha were the spirit of Marwadian cuisine, the driving factors that set the groundwork for becoming the soul of The Food Affairs.

Coming from a household with a backyard full of fresh homegrown and organic ingredients kept Sarita ‘ingredient conscious’, helping her always choose the best ingredients while providing her service.

After moving to Delhi, three decades ago, she observed that the vegetarian food palette presented in Delhi was very basic. Seeing the same limited varieties repeated with no variation in flavour, she embarked on her first endeavor, made from her home kitchen after being pushed by her near and dear ones. She ascended the ladder from a cooperating party to have services rendered for similar-scale events with ease. She’s trodden the path of advancement, treating her clients like family and getting bigger and stronger year after year. “I live to eat and feed” is the food mantra or, more accurately, a life mantra that Sarita proudly proclaims. Reading expressions of people as they enjoy and relish their food, and seeing them pleased, truly fulfills her. Sarita considers food as an element that may boost any celebration and touch the soul of an occasion based on her years of expertise in the sector. She rephrases a common saying, “The stomach is the path to “everyone’s heart.”

Our Indian cuisine is beautiful in its diversity; every 100 kilometers reveals a different style of cuisine. This variety is what motivates Sarita always to add a fresh twist to her cuisine preparation. She staunchly believes, “each cuisine type has so much to offer and learn from, and these lessons are rooted in the cuisine itself. However, what often lags is the way of serving to be quite ‘rustic’ in nature. Thus, the Food Affairs stands to deliver good food, great taste, and a greater appearance.

In Sarita’s thirty years of experience, she has found traveling to be the best part of working in the culinary sector. As she travels to different areas, she meets new people, learns new cooking skills, discovers new ingredients, and is inspired to create a new recipe. She states, “The best part about the food industry is that learning takes place in locations as large as cities and as small as neighbourhoods.” She has only worked at the firm Food Affairs for the last eight years; previously, the same place was known as Ruskriti. The name, a tongue twister, was highly Indian, meaning culinary flavour. However, this deeply thought name gave the firm a very Indian image; thus, the term “The Food Affairs” was born, inviting food experimentation on global flavors yet retaining the essence of Ruskriti in practice.

Sarita was recently featured in the everything experiential business-world magazine, where she discussed how food is a personalized craft for her and how, despite changing times and the growth of new ideas, what persists in cuisine is its authenticity and essence of ingredients. In addition to working in Indian restaurants, she has been spreading her love through food with people all over the world in places like Abu Dhabi, Phuket, Bangkok, Hua Hin, Spain, Turkey, Bali, etc.

She believes that the catering industry will always have a bright future as it will always be assistance for individuals to hand over to a service provider or cook in order to devote more time and attention to other aspects of hospitality. Thus, the responsibility of the catering industry would grow in terms of delivering high-quality food and well-cooking caterers to give a plate of good taste and health every time.

Finally, the issue of waste necessitates a great deal of attention for Bazaz. According to her, food waste has never gotten the attention it deserves. Avoiding food waste and practicing conscientious consumption is what the times call for; after all, food is a metaphor for life, and respect for food is respect for life for who we are and what we do.